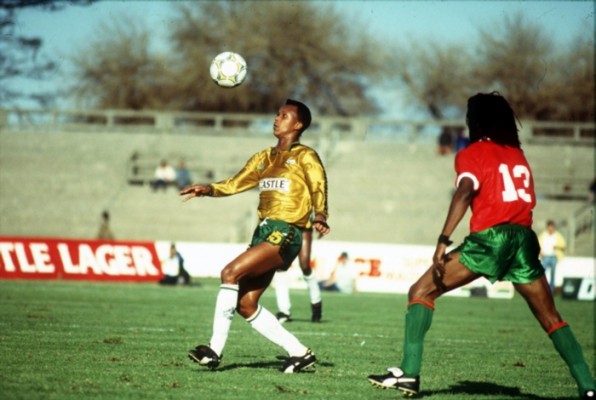 Doctor Khumalo is a South African footballing legend who was both the Kaizer Chief’s and Bafana Bafana’s star midfielder throughout the 1990’s, but never got the chance to prove himself in Europe. His full name is Theophilus Doctorson Khumalo, and the only thing better than his name was his technique. Khumalo spent 18 years with the Kaizer Chiefs, twice being loaned out, once to Argentina and once to America. He played and scored in South Africa’s first game following their re-admission by FIFA in 1992, bagging the only goal of the game in a 1-0 win over Cameroon. Revered in South Africa for his technique, vision and passing, Khumalo won 50 caps for his country, and is still heralded by many as Bafana Bafana’s greatest ever player.

Born in Soweto, South Africa, an urban area of Johannesburg which borders the city’s southern mining belt on June 26th 1967, Khumalo’s father, Eliakim, was also a professional footballer. A highly respected man, not just in the world of football, but within the local community, Eliakim was nicknamed ‘Pro’ or ‘Professor’, due to his intelligence, reading and understanding of the game. Like his son, Eliakim played as a midfielder, dictating play and controlling games. He played for just two clubs over his 14 year career, Moroka Swallows and Kaizer Chiefs, as well as playing internationally for Transvaal during the years of Apartheid, with whom he won 30 caps, featuring at both the 1963 and 1973 African Games.

An intelligent player who went into coaching soon after his retirement, Eliakim was the perfect mentor for a young and gifted player like his son. Doctor Khumalo began by following in his fathers footsteps, joining Moroka Swallows as a teenager just as his father had. Unlike Eliakim though, who had risen through the ranks at their boyhood club, and made over 200 appearances for them, Doctor left at the age of just 19, having only ever played for the Swallows reserve side. He joined Kaizer Chiefs junior set-up, who Eliakim was conveniently now coaching. He flourished under his fathers leadership, and was promoted to the first team after just a season.

Khumalo’s transition from reserve football to first team football was seamless. The training given to him by Eliakim had made Doctor an intelligent player just like his father, and he had a maturity on the pitch well beyond that of his limited years. Despite having only just stepped up to the first team, he almost immediately became a regular fixture in the Chiefs starting line-up. In addition to his technical skills and intelligence, Khumalo was also an exceptional athlete, and was rapidly becoming a complete midfielder. The Chiefs fans nicknamed him ’16V’ or ’16 Valve’ in reference to his powerful engine and tireless running.

Heading into the 1990’s, Khumalo had established himself as one of the best players in South Africa, still only in his early 20’s. The Chiefs were beginning to build a team around their young starlet, who was a creative force and the linchpin of a Kaizer Chiefs team who were establishing themselves as one of the best in the country. In the 1990’s, Khumalo and the Chiefs won three South African league titles and five domestic knockout competitions. In 1992, aged 25, Khumalo was named the South African Footballer of the Year, and with the end of Apartheid nigh, Khumalo was already being eyed up as a potential star of the re-admitted national team.

Such hopes were soon put to the test, as Apartheid fell and South Africa were re-admitted by FIFA in 1992. Their first international match following re-admission was sure to be a big event. A friendly match against Cameroon was scheduled for July 7th, 1992, at Kings Park Stadium in Durban, South Africa. A crowd of 40,000 people turned out to watch Bafana Bafana’s first game back. In terms of African opponents, South Africa couldn’t have picked a tougher game. Cameroon were fresh off the back of becoming the first African nation to reach the Quarter-Finals of a World Cup in which they had defeated Argentina and Roger Milla had become a world superstar.

Milla took to the field for Cameroon once more, but it wasn’t he who would be the star of this particular game, and it was the fans of Bafana Bafana who would end the day dancing. On a hot summers day in Durban, the game was not played at a terrific pace and chances were at a premium. It took until the 82nd minute for the deadlock to be broken, when the referee, Jelas Masole of Botswana, awarded South Africa a penalty. Khumalo stood up and calmly placed the ball past the Cameroon goalkeeper to give Bofana an impressive victory in their first game back.

South Africa failed to qualify for the 1994 World Cup, as Cameroon, Morocco and Nigeria occupied Africa’s three qualification spots. Their next big test would come in 1996, at the African Cup of Nations. It was only the second time the country hadn’t been automatically banned due to Apartheid, and they qualified automatically as hosts of the competition. Handed a tricky group featuring Cameroon, Egypt and Angola, South Africa began the tournament in emphatic style, triumphing 3-0 over the early favourites Cameroon. They narrowly defeated Angola 1-0, before a 2-1 loss to Egypt but topped the group anyway, by virtue of their goal difference.

Algeria and Ghana were the next two nations to fall at the hands of the invigorated Bafana Bafana team, being beaten 2-1 and 3-0 respectively in the Quarter and Semi Finals. South Africa were roared on by some incredible home crowds, whilst other teams played in front of bordering non-league attendances at times. Every one of South Africa’s games saw crowds of 80,000, whilst games such as Ivory Coast vs Mozambique drew a crowd of just 500 people, with even the other Semi-Final (Zambia vs Tunisia) attracting only 5,000 people, 16 times smaller than the crowd at South Africa’s semi-final. It was Tunisia who reached the final against Bofana, to be played out in front of a packed house at the FNB Stadium. South Africa were victorious, and it was a historic win on home soil. The “Class of ’96” became much-celebrated throughout the country, and no-one more so than Khumalo.

After the euphoria of winning the competition came despair for Khumalo, whose father Eliakim passed away a few months after the tournament. Eliakim was shot and killed in August 1996 during a hijacking. Nelson Mandela sent a letter to Eliakim’s wife, writing, “I learnt with shock of the fatal attack on your husband yesterday. Eliakim was an example and role model to all the young people of this country more especially those associated with football. His death is a tragic loss to us all. The police will leave no stone unturned to ensure that the perpetrators of this deed are brought to book. To you and your family, I convey my sincere condolences in this hour of grief and sorrow”.

16 Valve’s most famous game for Bafana did come in 1996, but not at the African Cup of Nations. It was the third annual Nelson Mandela Challenge match, and South Africa’s opponents were Brazil. 80,000 people flocked to Johannesburg to witness Bafana Bafana take on the star-studded world champions Brazil. In a sensational first half, Khumalo inspired South Africa to a 2-0 lead, scoring one and creating the other. Second half goals by Flavio, Rivaldo and Bebeto spared Brazil’s blushes as they won 3-2, but Khumalo had proved himself against the best team on the planet.

Khumalo had spent part of the previous season playing in South America, on-loan at Argentine side Ferro Carril Oeste, the club where Argentine greats such as Roberto Ayala, German Burgos and Silvio Marzolini were discovered. Khumalo played only 4 times in South America, scoring once against Independiente. He made a second loan move the following season, this time to M.L.S. side Columbus Crew. Having joined a struggling Columbus side, game time was more readily available in the U.S. He became the star player and captained the team in the 1996 and 1997 seasons, playing 43 games, scoring 5 goals and making 6 assists.

Khumalo returned to South Africa and the Chiefs in 1997, and joined up with the national team for their 1998 World Cup qualifying campaign. Bofana qualified for the World Cup, where they lost only one game, to France, but draws in their other two against Denmark and Saudi Arabia meant they didn’t progress past the group stages. Khumalo went on to play for his country until 2001, and the Chiefs until 2002, although he stayed on in a player-coach capacity before announcing his full retirement from playing the game in 2004.

Since retirement, Khumalo has worked as a coach, commentator and actor. Having served briefly as player-coach at Kaizer Chiefs, he began working as a commentator and presenter of South African football in 2004. Having completed his coaching badges in 2007, Khumalo returned to the Chiefs where he became the coach of the club’s under-17 team, and has since become the club’s assistant manager. Khumalo made his acting debut and, to date, his only film appearance in the 2010 South African/German production ‘Themba’, in which he played a football coach. In 2004 he was named the 62nd greatest South African of all-time, in a list headed by Nelson Mandela.