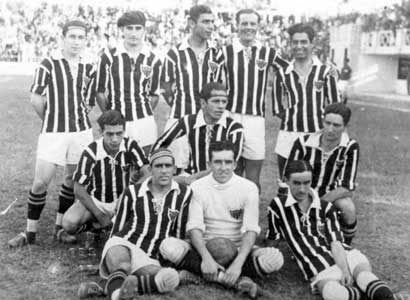 Between the years of 1927 and 1931, Atlético Mineiro had perhaps the most deadly attacking trio that the game has ever seen. The club’s front three, which became known as ‘Trio Maldito’ or ‘The Unholy Trio’, were a combination of three intellectuals, two studying medicine and one studying law, who continually delayed their degrees in favour of their first love – football.  Mário de Castro is the best known of the three, by virtue of his strong claims to have the best goals to game ratio in footballing history; but the tale of all three is one that is scarcely told outside of Brazil.

All three players showed exceptional academic promise as youngsters, and as such, their parents were keen for them to utilise their intellectual prowess in the pursuit of respectable careers and professions. The trio all headed off to university to hone their chosen disciplines. Mário de Castro and Jairo de Assis Almeida both studied medicine, whilst Said Paul Arges studied law. Fatherless, Castro was brought up by his widowed mother and four siblings, and it was she who took a particularly hard line on her sons sporting intentions, banning him from even playing the sport from a young age, in the fear that he might one day favour the sport over a more solid and better paid career.

Castro feared going against his mothers will but could not relinquish his love of the game, and chose instead to play under a false name, to ensure she would never hear or see his name on the radio or in the newspapers. Castro hence became known to the footballing world, simply as ‘Oriam’, roughly a reverse of his first name Mario. He began playing for Atlético in 1926, aged 21. In his Galo debut, Castro scored three times, as the club ran out 6-0 victors against crosstown rivals América Mineiro, in a win which saw the club lift the 1926 Mineiro Championship.

His debut set the tone, and both Castro and Atlético experienced great success over the next five years, winning titles in 1926, 1927 and 1931, with Castro as the divisions top scorer in 1926 and 1927. Castro became the first player from outside Rio or Sao Paulo to be called up to the Brazil national team for the inaugural FIFA World Cup in 1930, but turned down the offer when he was informed that he would be second choice to Botafogo striker Carvalho Leite. As such, the Rio-Sao Paulo axis remained unbroken, and Brazil failed at the World Cup, being knocked out in the group stages as Yugoslavia topped their group. In August 1930, just months after the World Cup, Castro faced Leite as Botafogo and Atlético played a double-leg tie. In Atlético, the home side won 3-2, as Castro completed a wonderful hat-trick and Leite failed to find the net. In the return leg it was Botafogo who had the upper hand, winning 6-3, as Leite struck three times and Castro twice.

Whilst Castro was always the star of the three, both Jairo and Said were regarded as exceptional footballers in their own right. Said was supposed to complete his law degree by 1932, but became so enveloped in football, that it took him until 1942. Known as something of an eccentric, Said was apparently a reserved individual who only opened up to those closest to him. He never practiced law, despite attaining his degree, choosing instead to become a TV Director, where he worked for Belo Horizonte network TV Vila Rica. He played for Atlético from 1926 to 1932, before returning briefly in 1934, scoring a grand total of 142 goals, largely from the right wing. He passed away in 1994, aged 89.

Jairo, meanwhile, a fellow student of medicine with Castro, was a year older than Castro and Said, but joined Atlético a year later, making his debut aged 23, in 1927. The most industrious of the trio, Jairo was a supremely fit athlete, who struggled to divide his time between studying and working out in the gym. He left Atlético in 1933, having scored 122 goals. Very little is known of Jairo’s post-footballing life, but we do know he died in 1987, living in Belo Horizonte until he was 83.

All three players retired before the age of 30, but it is the story of Castro’s retirement which is the most tragic. Aged 26, he was still the most prolific striker in Brazil when he retired. In Atlético’s final game of the season, they needed to win in order to ensure the Mineiro Championship title would be theirs. Things were not going to script as the side were 3-0 down to Villa Nova at half-time. In the second half, Castro made history, netting a staggering four goals to clinch a 4-3 victory for Atlético and with that, another title. In the aftermath of the game, however, the celebrations grew wildly out of hand, and one of the Atlético directors shot and killed a Villa Nova supporter. Shocked and outraged by the incident, Castro refused to play for the club again and hung up his boots at just 26.

Upon retirement, Castro had scored 195 goals in 100 games. His record of 1.95 goals per game is claimed by some to be the most clinical in the history of the game, narrowly greater than that of Sporting striker Fernando Peyroteo. Castro practiced medicine for 22 years in Belo Horizonte, providing service to many in the region and furthering his reputation as a local hero. His story of footballing brilliance will be forever blighted by the tragedy which marked the end of his football career, but in Atlético, the legend of ‘Trio Maldito’ still remains. The club honoured their contribution in 2008, at  Atlético’s 100 year anniversary.